Last weekend me and my wife were down in Eindhoven in the south of what was a very sunny and warm Netherlands. While visiting a friend down there we discovered they have a telescope. Oh, I was so excited! For many years, having a telescope has been a dream of mine but alas… they aren’t exactly cheap instruments and I always had the feeling it would be something that would get old pretty fast.

However, as soon as I had the chance to point the telescope at the tiny shiny blimp in the sky which turned out to be Saturn, and as soon as I was able to see its rings hanging around its spherical mass of gas, I was in love. “Wait, let’s point it at the moon!” – and I was even more in love. Somehow there is some astronomic quality and reality to seeing things through that glorified mirror-lined tube that photos simply cannot capture. Much the same way a single photograph cannot capture the greatness of the Great Wall, much the same way photos cannot describe the feeling of a plane banking to 30 degrees inclination to pull you out of the floor, out to 39000 feet to take you places… astronomic photographs, as spectacular and colorful as they may be, cannot describe the feeling of DIY pointing the telescope and sitting there looking, wondering, imagining.

This means, of course, one thing: for the next few months I will be badgering my wife, trying to persuade her to allow me to invest in a good telescope.

Part of this persuasion started last night when the ISS was flying past us at its incredible speed. Normally the ISS would only be visible in the wee hours of the night and we would have to wait for the right day where all the conditions were met. You need a clear sky, the station to be passing around your area and patience to wake up in the middle of the night to see it. But last night at 23:13 would be a perfect time to spot it. Our plan was almost foiled by the patchy clouds which were planning to ruin the fun but a couple of minutes past the announced time, there it was, in all its glory. A small patch of reflected light, in total size bigger than any star, bigger indeed than any planet  and about as big as one of the planes which usually make for the Rotterdam/The Hague airport around the same area. But this one was different. It was not blinking but rather reflecting light, constantly so, and flying at a different bearing than of the planes. Hiding here and there behind one of the clouds, it was as visible as it could be in the sky which at that time was not yet so dark. In effect, as I recall, the sky’s light night blue was probably the best to spot the station. Too dark and the station’s colors would get lost in the background, too light and it is simply not visible at all, overexposed by the sunlight. It’s pretty tough to find a photo of what we saw last night, mostly because spotting the ISS with the naked eye requires conditions which are very adverse to photography (darkness + fast moving objects) so here’s a photo of the ISS in all its glory (photo courtesy of Wikipedia): 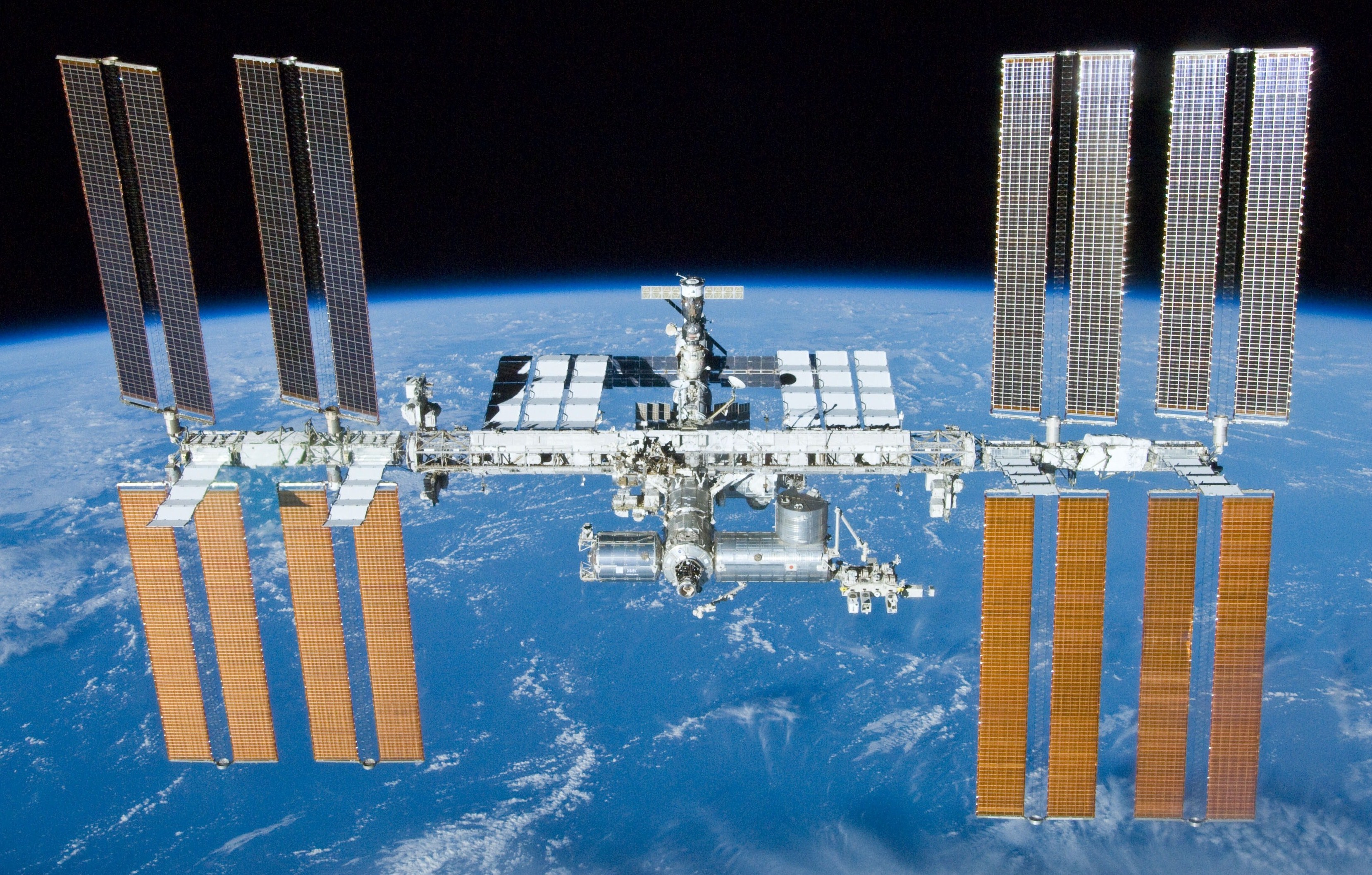 This was it, this was yet another step towards my space exploration. Yet another step in convincing my wife the 300 euro I need for a telescope will be worth it.

Oh yeah, my post’s title was about how to see the ISS, right? Oh that’s pretty easy… If you have a smartphone, specifically Android, you can use the ISS Detector app. Fill in your location and you’re good to go. Otherwise just head over to NASA’s very own “Spot the Station”: http://spotthestation.nasa.gov/ . It’s really worth it and you should definitely give it a go.

EDIT: Last night we were “station spotting” again and I managed to snap a picture of the ISS in all its glory. In a surprisingly clear sky, I feel that the photo does not make justice to the real thing but indeed, it is better than nothing!